Ecology: A branch of science concerned with the interrelationship of organisms and their environments

Ecology is too complex a thing to think we know it all. And it’s too big an idea to imagine we can understand it from a book, without in situ experience. It’s all change and every organism is linked to every other in the biome. We see pieces of that and try to draw sweeping conclusions and hubristic projections. The biome will change – some of that change will come from us humans, some from the forces that have always steered environmental evolution. Some changes we’ll find pleasant, some not. We’ll call the changes we don’t like, or that look ugly, “degradation” while we’ll call the florid, greening changes “flourishing”. I’d like to learn to appreciate nature at any and every given point on its continuum for what it is: transitory and adaptable. I wish only that I had the mind to know and love it all. 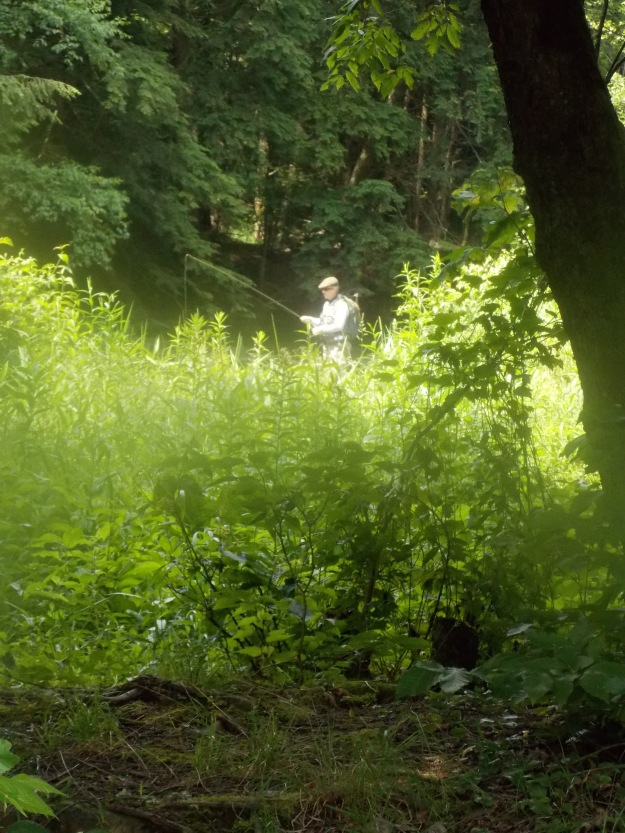 4 DAYS IN THE MOUNTAINS, SYNOPSIS

Last week I spent four days in the wild, learning along with friends about the ecology of southeastern Pennsylvania from an array of perspectives. My friends are resource management professionals, some whom I’ve known a while, others new. The conversations were rapid, in-depth and occurred while immersed in wild places. An old friend of mine, Adam, from Pennsylvania’s Department of Environmental Protection, and I, did a long haul drive through a portion of the state I’d never set foot in before: the southeastern quadrant. Here we rendezvoused with Ryan, a DEP entomologist, to visit the Stroud Water Research Center, a lab recognized internationally for excellence in all things pertaining to the science of freshwater communities. We spent hours with the director and then Adam and I headed west again to a campsite high on an Appalachian ridge where we enjoyed fine fishing for large native brookies before dark. In the morning, we traveled north a bit to another state park where we rendezvoused with Paul, another DEP employee and an expert on herptiles (reptiles and amphibians) and much else in the Pennsylvania mountains. We spent the majority of the day hunting “herps,” climbing mountains, and discussing all from duck weed to hemlocks. Adam and I sped back east in time for me to get back to my own car before dark and travel north again to a major Allegheny River tributary. Rain had been incredible in western PA while I’d been away and I needed to see if the stream would be fishable in the morning. Most anglers probably would have said “no” but I could see that the water was falling and clearing and so I called my fly-rod friend Nigel and asked him to meet me at 7:00. I spent the night sleeping on the forest floor beside the stream at a place I love and have slept in the past, below great sheltering hemlocks. Nigel arrived as planned and we spent the last day of my grand expedition wading the stained waters, garnering willing browns. We fished miles through a deserted valley, far from roads, close to wildness. 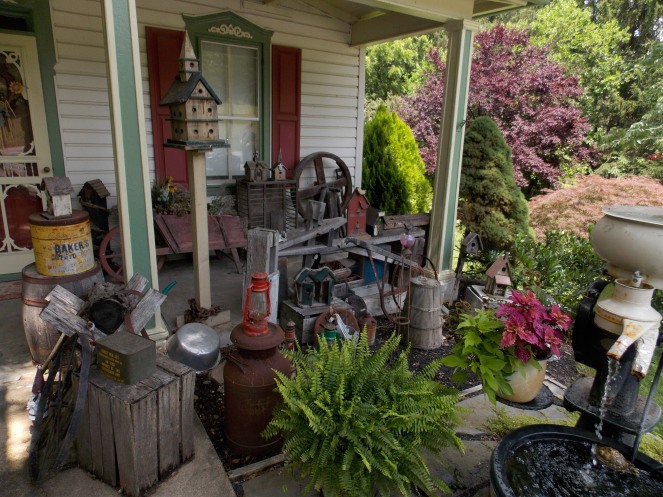 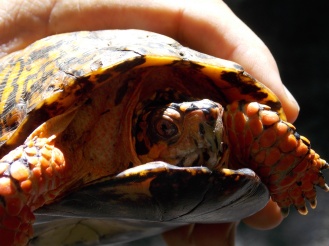 I can’t come close to recounting the very pertinent conversations I was party to or a part of. Just too much. But by mid-trip, a theme started to take shape, something below the surface of our wide-ranging discussions. And maybe I’d just characterize it this way for simplicity: you wouldn’t learn any of this in school.

Talking with Dr. Sweeney, the director of the Stroud Center, he mentioned with particular pride, a study conducted on the physiological responses of aquatic insects to rising water temperature. It has long been assumed that particular insects die or have growth and reproduction impaired by rising temperatures due to the inability of warmer water to retain dissolved oxygen, which the insects filter from the water typically by external gills. This is the orthodoxy among entomologists, as far as I know. But a battery of insect species were tested in a controlled, meticulously observed environment (which we were able to observe) and the findings flew in the face of expectations. When dealing with environmental stressors, organisms synthesize genes unique to particular stressors and recognizable as such. To shorten what was certainly a long story, no genes indicating oxygen stress showed up in any of the nymphal insects tested. The mechanism at play appeared to be metabolism, which excellerated with rising temperatures to a point that their internal processes “burned out,” for simplicity and, again, to make a long story short. Entomologists and aquatic biologist have seemed certain of the orthodoxy on this fine point and yet when tested with today’s best available technology, things weren’t as they’d always seemed. I’m sure I haven’t really done justice to the quality of this study – it’s just a poor layman’s attempt.

Walking along Clay Creek, an intensively studied lotic system largely owned by Stroud, the director mentioned more than once the “legacy sediment” underfoot. This was a thick layer of something like a loam atop the more ancient soils, a deposit that had resulted from historical agriculture. Dr. Sweeney spoke of it as a threat or a danger to the ecology of the watershed, a layer that some had said should be mechanically excised at astronomical cost. All this to, presumably, return the watershed to something closer to pre-Columbian perfection. But, looking around, plants and animals seemed to be thriving here, as well as aquatic life. Particularly aquatic life, the director emphasizing again and again the excellence of Clay Creek’s ecology, the diversity of its macroinvertebrate community. All this goodness was possible concurrent with tons of legacy sediment.

Lunching later outside the Stroud Center, Ryan mentioned a study that had been approved and funded by the Department of Environmental Protection involving changes to the aquatic community resulting from unnaturally high nutrient inputs. The researchers had simply introduced fertilizers upstream in a flowing system and then analyzed the organisms downstream over time, counting and measuring (and staying employed) to see how the natural balance would be harmed by this influx, which might approximate agricultural effluents. Ryan said that, in the end, the bugs in the water got fatter. Environmental degradation or fatter, happier trout?

In the car later, Adam and I discussed the role of models in science, and particularly the heavy reliance on models in the forecasting of global climate. We’re both skeptics of the prevailing wisdom in this area. To paraphrase Adam, “We use models at DEP in regulation of wastewater and many other things and models can be made to give any result we’d like to see. It’s not hard.” How much of our knowledge of environmental threats is shaped by such models?

The next day we found ourselves climbing some of Pennsylvania’s lesser mountains with Paul, a real expert on everything living between at least the Allegheny Front and Atlantic Ocean. Here climate change was addressed, as it does necessarily affect all living things. Paul sees climate change as inescapable, a form of change inherently tied to the most essential processes of our planet, as it always has been. “And why can’t we understand that carbon dioxide is a nutrient, not a pollutant? Our trees love the fact that CO2 is more available than ever and the forest around us is the proof.”

Years ago, I sat down with a scientist at a USGS facility who stated the then emerging case against Marcellus deep shale development. Among the environmental disasters that would come with this development, to his thinking, was disruption of the vital forest canopy and a train of food web re-alignments that would follow. But while ascending a steep forested slope with Paul and Adam, they both pointed out to me newborn baby white pines, the rightful climax trees of most of the Pennsylvania forest. Apparently, they would never get much bigger until some of the fast-growing dominant hardwoods died and fell, opening the canopy. They couldn’t flourish until other trees fell and the canopy was disrupted. 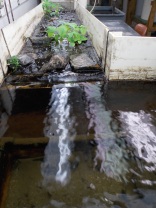 The commonality may not be apparent here. But simply stated, it’s this, I think: let’s approach all of this with humility. A lot less certainty in our ecology would go a long way. Nature is infinitely nuanced and infinitely in transition, both cyclically and evolutionarily. We’re quick to label things “bad” or “wrong,” insensible to nature’s remedies which are already in motion even as we label and scheme. Even our bodies are microcosms, healing processes still hardly understood by science activated by the sicknesses themselves. Why would the rest of the biome we inhabit operate any differently? The changes we inflict on nature entail a range of consequences we can’t know.

Yesterday, I had the privilege of rescuing ducklings from a storm sewer in downtown Pittsburgh with my friend Andrew. The mother duck lay in a heap near the heavy steel grate where she’d been hit, probably the night before. Extraction seemed like mission impossible but we made it happen and the little mallards cooperated with our program. They’ve been fed and are in good hands today.

And there’s another part of the picture: It’s not all science. It would have been more responsible and perhaps better for the ecosystem to leave the little ducks to their fate, nature and natural selection taking their course. Humans wouldn’t have interfered and introduced imbalance, to follow the consistent trajectory of the orthodoxy. There’s maybe a hungry raccoon who could have figured out how to retrieve the duckies as well. But here, and in so many other instances, it’s not just the biology of things is it? There’s a human element and we humans are wired to love vulnerable and attractive things. It causes us to rescue baby animals and it infects all of our environmental efforts.

On what basis should we make decisions for non-human nature? Is there enough commonality in our diverse perspectives to unify even our environmental goals?

One thought on “Ecology Beyond the Textbooks”