8:30 PM – It’s dark outside and darker here underground. This tunnel allows a tiny brook to flow under the freight yard down to the Allegheny River and allows me to reach the walleye, I can only hope. At least when your fishing begins with sloshing through a dark tunnel to a flooded river, you can be sure it’s going to be an adventure tonight. And now I can make out the orange lights of the dam reflected from a quarter mile of cavorting water up ahead.

9:00 – I’ve got something on, heavier than leaves but not as heavy as even a sauger. I swing the writhing little mass up to my hand where his slime immediately coats my palm. A mud puppy! Just when you least expect to see one of these giant aquatic salamanders – there he is. The hook is easily dislodged from his tail and I’m sure he’s happy to drop from the cold air back into the relative warmth of the river. So now I’ve taken one mud puppy and one foul-hooked shad which is up on the bank – I think I might like to try eating it. And if the walleye don’t appear, shad is all I’ll be eating.

9:10 – I’m in the water now, alone here at a place that other fishermen see at a glance is too turbulent, muddy and generally dangerous to fish. Little flames twinkle along the crest of the lowhead dam, bright orange street lights along the highway just upstream. I hear a little rustling back near my shad and scan quickly with the headlamp. Admittedly, it’s unnerving tonight to be alone here out in the currents, at the mercy of the river. Maybe a bite, maybe not as I retrieve the soft plastic minnow again and again.

9:20 – More animal noises near my shad as I turn to leave. The light is clicked on immediately, in time to see the mink pull Mr. gizzard shad by his largely detached head, down the weasel hole. I hadn’t recognized the crack in the rocks as a weasel den when I’d neatly placed my shad immediately in front of it.

I leave the dam via the same tunnel, fishless but undeterred. Conditions are right, muddy water or not, and I know this because of the catches of the preceding three days. I’d guessed three days earlier that the flood conditions that had innundated southwest Pennsylvania would bring the walleye of the Allegheny River into the tributaries and I’d hit it on the nose. Virtually every morning and every evening since then I’d been on the water, catching more walleye than I’d thought possible. Not huge numbers really but this is a fish I’d never done well with but I was now taking home at least three walleye or sauger nightly. They weren’t big for walleye, but they’d been just right for the pan, which is what’s important when dealing with Pennsylvania’s tastiest fish.

9:50 – I’m wading again at another tiny flooded inlet that usually offers an extensive gravel bar for casting but not tonight – muddy flood water covers all. I launch a fat twister-tail grub into the shallow slack water in front of me, turn the reel handle twice and the line goes tight. Walleye on! It’s a fat one and plows into a mass of flooded saplings. I reach into the water and scoop under his belly when I catch up. It’s not a walleye – it’s a silver redhorse, a rare prize but maybe not something I want to take home for fillets. You just never know when the line goes tight in the middle of the night. The urban world around me grows quieter though headlights can still be seen on the bridges and highway.

10:50 – I’m watching a huge beaver cruise past – not the first I’ve seen tonight nor the last. The beavers like Pittsburgh and their population has metastasized here along the banks of the Allegheny. I whistle a tune to him for a little while and watch him turn back and forth, enjoying the serenade, as all beavers will. Then he slaps his tail violently and is gone.

11:00 – The place is deserted and I’m warming my hands by a fire the teenagers made who’d been here when I’d pulled in. There’s something very pleasant and woodsy about this in spite of the concrete and mellow drone of the city. The moon has risen now and it’s a bright, crisp night; a good night to be out chasing wild fish. 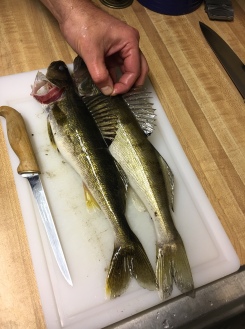 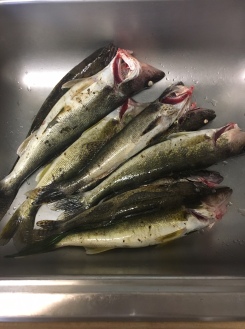 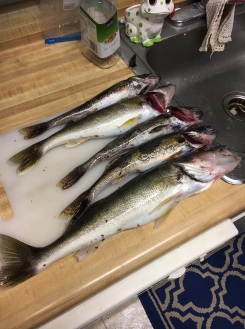 11:10 – I find my way through an octopus of ramps and up onto the highway along my side of the river, heading into the denser parts of the city. I cross a major tributary here and can’t help thinking about last night’s walleye feeding frenzy – the only time I’ve ever seen this. I’d been in my waders below a bridge. The water had been high, stained and full of the immature shad who’d pulsed in waves back and forth across the surface. Thousands, maybe hundreds of thousands. Then the walleye had arrived, fresh up from the river. They’d crashed the shad into the shore, leapt and rolled on the surface, exposing gold flanks in a way walleye just aren’t supposed to do. I’d taken my finest catch to date, largely by reaching out over the bank a bit and dangling the soft plastic minnow on the surface, ripping it back and forth. Six had come home with me, a combination of walleye and sauger.

11:20 – Pulled into another deserted lot. Probably not supposed to be here but I’m kind of a risk taker. My pack is on, heavy fleece hood thrown over my head, and I’ve disappeared onto the shadowy trail before anyone could have possibly seen me. It’s been a long time since I’ve been here and I’ve never fished it for walleye at night. It just seems to fit the pattern of a place that will gather fish tonight. I hear them on the surface of the pool as I drop the pack and prepare to cast. The cavernous mouth of another tunnel opens here and I hear the tributary stream spilling down below the rail road tracks. On the other side the great river rolls on, rushing down toward the Ohio, a few miles off.

11:30 – I slide into the edge of the water to land a first walleye – about 17 inches – another perfect eater. I’ve got one on the bank and high hopes now that I’ve found them. More splashes of feeding fish echo from inside the tunnel and out toward the river. I’m aware of schools of baitfish on the surface here too. Tap! and there’s the next one affixed to my Sassy Shad.

4:30 AM – I’m chugging along the railroad tracks, watching the stars above the Steel City and warming with each step. Walking vigorously has been necessary through the night and wintery weather has finally arrived in western Pennsylvania. The walleye aren’t complaining about the cold though. They could hardly have been more active tonight and some have had minnows falling from their mouths as I’ve landed and dispatched them. The walleye came first and later the sauger but things had quieted down over the last hour and it seemed a good time for a starry hike down to the next inlet upstream and back.

7:00 AM – There’s light in the sky and ice on my rod guides. I’m clinging to life as my eyes try to clamp shut. I’ve carried four walleye and five sauger up to the car already and released more. I’ve caught the most walleye I’ve ever caught in a night (7) and possibly the most sauger too. At around 5:00 AM I’d been jolted awake by an unusual fish that had rushed in out of the river current to seize my tiny shad. The rod had bent hard and I’d known that this was not another pound-and-a-half fish. Her white side had flashed and I’d been shocked – this was one of the walleye I’d heard inhabit the Allegheny but had never seen for myself. I’d lain on my belly, reached down to the water and tossed her up on the bank. I’d found my tape measure as she’d lain still gasping and read “26.” This was a 26 inch fish – something between 6 and 7 pounds – by far my largest.

I commanded her, “Go make more walleyes,” as I launched her back into the dark water. 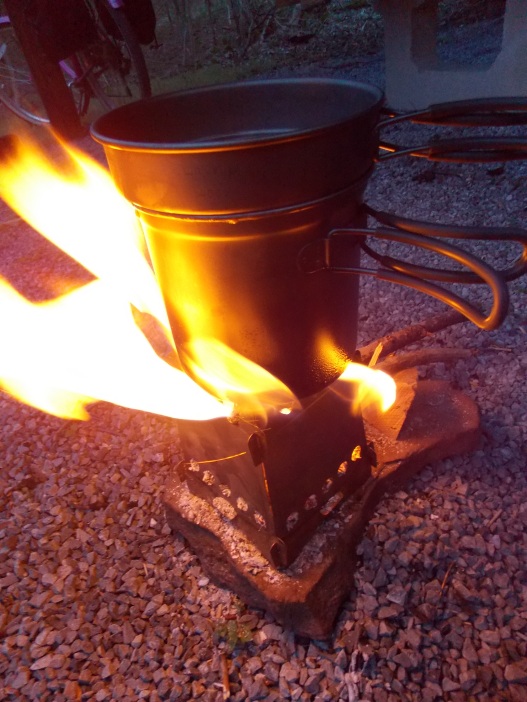