I don’t think animals worry a lot. Even when there’s snow covering the green grass in April, the birds are moving right ahead with nesting and the groundhogs just wait for some afternoon sun to dispel the chill. The animals simply move ahead with life, providing for their own needs and starting a 2018 generation of new animals.

I’m sure that I was more worried than the animals around me as I stretched, looking steeply uphill into the trees, contemplating the first long climb of what would be a very long run. I’d always wanted to attempt a run around the perimeter of North Park, here in the Pittsburgh suburbs and today had seemed like the best day possible for it when I’d woke to snow-draped trees and buildings. I didn’t know how long the run might really be either. After years of running around the park, I still have only a guess at its outer dimensions. All these things – birds, snow, and endless back-country trail were swirling in my mind as my stride became a running pace and I began the ascent.

A mere three minutes later, I was out on a sun-drenched meadow at the top. My tracks were the first tracks in the snow up here – I don’t think many visitors to Pittsburgh’s largest park even know this meadow exists, so even on fair-weather days I’d never seen anyone else up here. The millions of crystalline sparkles from the last snow of the Pennsylvania winter assured me that I was in for a fine run – it would be a day well spent. I wore shorts and a light shirt but by the time I’d made the first rise, cold was not a problem. The chickadees cheered for me as I shuffled forward through the snow.

It’s been a good winter. I was able to keep up some semblance of a running program from January first on – a new-year’s resolution that turned out to be achievable. It’s always nice to be ready for long runs when the first warm days of April arrive, instead of spending these finest days trying to get the legs back in condition. I fished quite a bit through this winter too, taking advantage of several weeks of ice cover to get out on my favorite lake and drill holes. For me, there are no better days than the ones in which I wake in the snow beside the lake and have holes drilled before sunrise. Just before the ice became too soft to trust, I spent a night sleeping under the stars in the middle of the lake, fishing holes cut beside my snow bed, owls and coyotes talking to eachother across the frozen expanse. My morning run was a tight little circle out on the ice in snow boots – just for warmth, really. 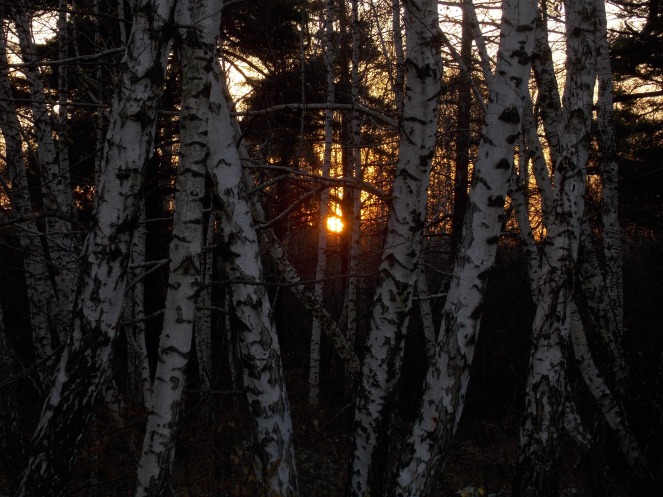 But today seemed like the end of my winter. I paused as I’d been doing all morning and scooped a little snow to dissolve slowly in my mouth – a good source of hydration as I carried only one water bottle. This snow would be gone by sunset as would the coldest season, I suspected. The second long climb took me up through a white barberry corridor – the corrosive sun wouldn’t reach this place for hours yet. My legs were already straining and I felt that this might be a shorter run than I’d imagined. At any rate, I’d known from the outset that I wouldn’t really be completing the loop today. My longest run recently had been about ten miles and the loop would be, at the very least, twice that long over fairly tough trail. The chickadees welcomed me to a second summit and I paused to tweedle back a greeting. The chickadees seem to fit well with a snowy forest.

I was still making tracks in the snow, still the first person to pass this way and soon a third climb was behind me as I circled another high meadow. Now I traversed the headwaters of Rinaman Run – out, around, up and down for three miles or so, pausing only to socialize with the towhee couple who’d moved into a certain thicket here the week before. They told me, in a long series of peeps, that spring was no doubt here. Simply seeing them seemed to confirm this.

Winter was going away as I came out into the sunlight of the soccer fields. A  gaunt deer family had gathered at one corner that was now grass, the snow cover receding with the sun. I live miles from here but all of the snow from this hilltop would be washing past my apartment sometime later today. Another meadow followed and more miles of woods. Now one side of each hollow was snow, the other bare and the stream at the bottom enlivened with cold runoff. I could still find a little snow to suck on for now. I passed no-one, or at least no people but the woods and fields were alive with birds now who seemed well aware of the change of season that had arrived today. 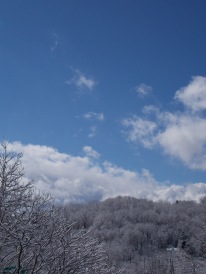 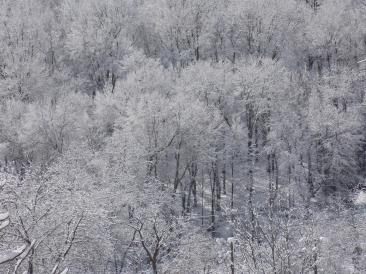 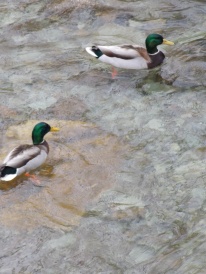 Spring is as bittersweet for me this year as it always has been. I love the stark and sterile winter forest – a place and time that takes me back to younger days in northern places – frozen lakes and foreboding mountains. We don’t get a lot of winter in southwestern Pennsylvania and this too makes me treasure our brief spell of cold and ice. And for me, it’s perhaps the best season to get outdoors because few other people share my attraction to snowshoes, ice augers and mittens. I enjoy solitude at this season while most of the outdoors people around me long for spring.

There was a long, sweeping, almost floating downhill stretch now as I crossed my ten mile point. I produced a cookie from my pocket and ate it in celebration (and in desperate need of sugar). Snow was sparse, the trail was soft and the freshets rushed on their way down to Pine Creek. I didn’t know how much my legs had left but I was going to find that limit today – a test of where I was at as a runner. There were fewer birds now in the late morning hours and I hadn’t seen a deer for a while.

I was by no means fast as I groaned my way through the next two climbs – steep ascents that had been carved out to allow mountain bikers to gain maximum speed. I knew that this was a make-or-break point in the run and that if I could make it, I’d probably be able to coast on for several more miles. Legs throbbing, I summitted and caught my breath.

“Dee – chicka – dee-dee-dee!” someone yelled from a branch overhead. All the chicks cheered for me. 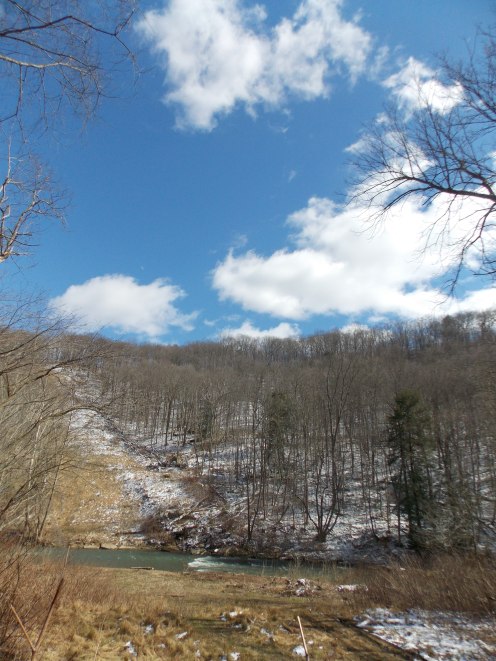 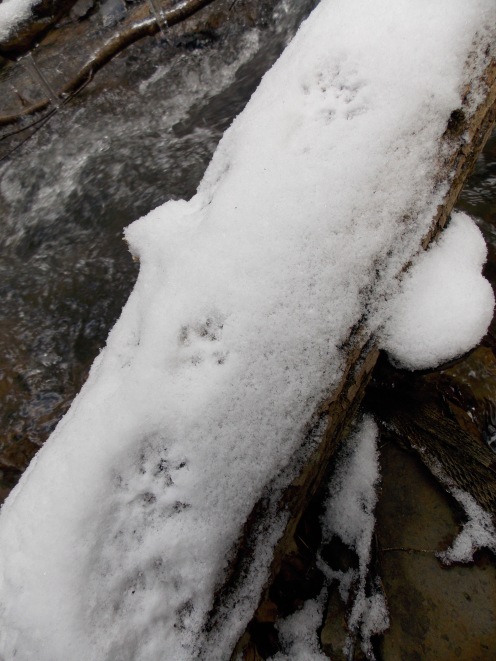 Now it was clouding over but warmer. Still no other runners shared my trail – there were only the sounds of my footfalls, birds and distant traffic. I was splattered with mud and nearly exhausted but happy. After a winter of running this seemed to be the right way to say good-bye to my favorite season. There was little snow in sight as I began a long set of switch-backs up to another one of North Park’s high points. I could feel the lactic acid hitting my calves and thighs in a way I hadn’t felt on any shorter recent runs.

Half an hour later, I was in yet another seldom-seen valley of North Park, rushing downhill along a freshly re-charged brook. There was no snow now. The last of winter was rushing past me in riffles and rapids. Cold water and a damp micro-climate here in the ravine were all that remained. Vernal ponds had taken over the lowest points of the flood plain and by nightfall, the rock walls around me would echo with the reproductive chorus of the peepers – the point at which the melting snow would facilitate the birth of a new generation, would usher in new life along the running trails of western Pennsylvania.

Then, finally, I was out in the open sunshine of a rail line, an engorged Pine Creek sweeping past on its way to the Allegheny and Ohio Rivers. It had been a fine winter and this seemed a moment to pause in a long run and appreciate the goodness of all the seasons. We’d all be better people for learning to appreciate nature’s change rather than our favorite places and seasons alone, I think – always facing forward on the long trail and seeing opportunity wherever we can. And some might offer that this is the only way to appreciate nature – for nature is nothing but change. 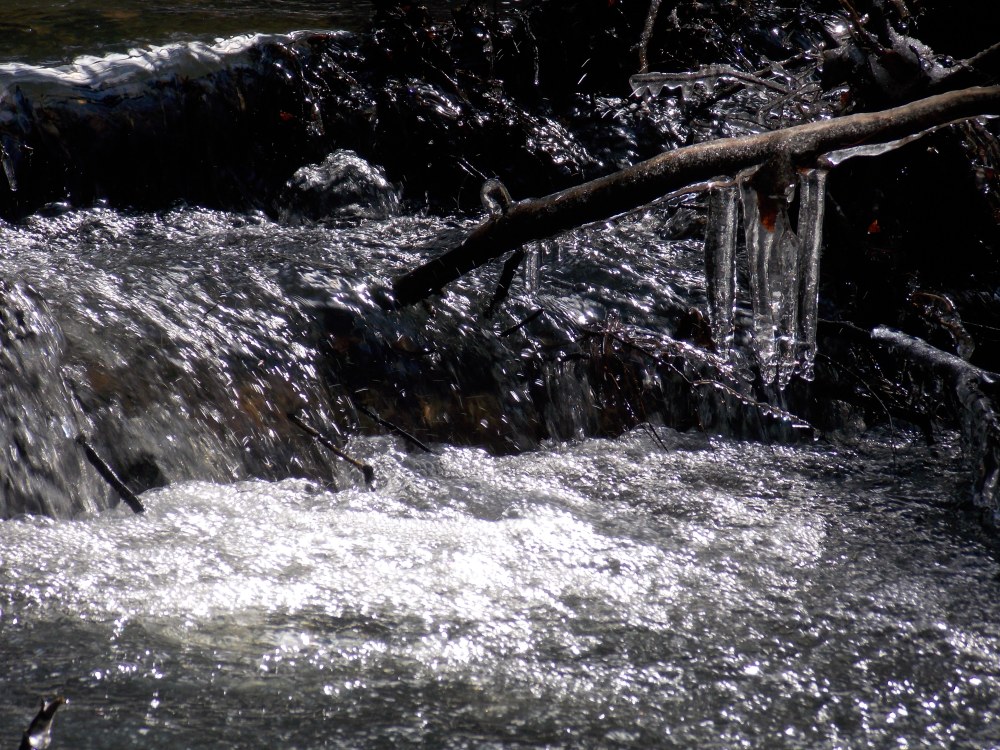