Early January outings portend well for the year ahead. My best guess is that this year will be a good one for finding new places to pursue fish, an excellent 12 months of finding flourishing wildlife and an unprecedented period of learning about the fungi of the Pennsylvania forest. Anyone who’s read this ongoing account of my adventures and findings for a while knows that I love to be out and about in winter and this year is no different than those past.

I checked in on the burgeoning Pennsylvania elk herd on New Year’s Day just because I haven’t in a while. They’ve been prospering since the 1980’s and all indications are that the herd is still growing. Estimates from nearly two years ago placed the Pennsylvania herd at about a thousand. I counted 110  on the afternoon of the first, at disparate locations within Elk County.

Shortly after getting home, a friend contacted me wondering whether now would be a good time to fish walleye. He’d never taken a walleye before but was eager to learn how. I pulled up current water data for local streams and rivers and found discharge numbers I liked. Essentially, it had rained a lot lately and both rivers and streams were high – it was indeed time to fish walleye.

Rail gravel crunched beneath our boots as we skirted rail yards and hiked more than a mile to the inconspicuous stream inlet I wanted to be at as it got dark. Arriving, water levels looked ideal – a high but not flooded river and a stream that could only be heard through a tunnel, tumbling and rushing to join in the river’s downstream surge. The pool at the confluence could be described as “walleye green,” a very special hue I like to find. Just after dark, Anthony caught his first walleye and fifteen minutes later, his first sauger – both small fish but keepers. 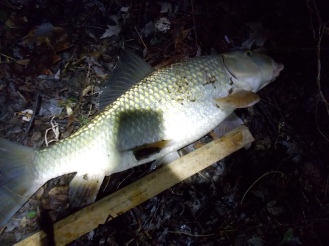 Long after dark, we tried at a bridge over a larger nearby creek. The water here seemed, if anything, too high and muddy but after a few fruitless casts, Anthony again set the hook, this time into the jaw of a trophy walleye that had run up from the river tonight. Anthony was dazzled by the dinner plate eyes and simply amazed that such fish could be found running up such small streams and in such a distinctly urban, industrial setting. No owls could be heard over the oppressive din of highway traffic here. Yet, here  too were the wild things. 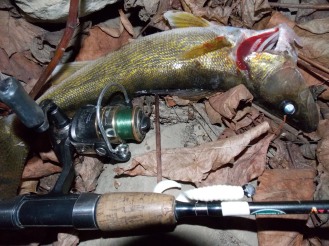 Fish and wildlife of all kinds often seem most active at dusk and dawn and this is why I often sleep outside or in my car to get a jump on them. Waking early along the Lake Erie shore, I was soon wading in the gentle waves where a small brook tumbled in across a broad gravel bar. It was the essence of wild peace and solitude. Had I embarked immediately in a kayak pointed due north, I could have likely experienced the same serenity throughout the day and the night to come until washing onto the Ontario shore. It was all pure and silent but for the rhythmic wash of a cobble shore. I was soon aware that I’d have to go elsewhere to find fish though – but not far.

Of course, I was in pursuit of steelhead trout, the closest thing Pennsylvania can offer to salmon and, indeed, these are larger and more powerful fish than the landlocked Atlantic Salmon I grew up with in Maine. I hiked upstream along a woods road then cut back into the woods, through greenbrier patches, around gullies and over blow-downs, down to the brook as it wound its way through the clay substrate. And to say “wound its way” is an understatement for this flowage – the meanders were extreme across this flood plain, proceeding toward the lake in tight hair pins.

Despite the earlier lack of fish, I felt I was in the right place at the right time today – water level and clarity at what I consider optimal – too dirty for most steelhead fishers. The first pool I spied was packed with dead wood and seemed at least deep enough to harbor fish. I enjoy the mystery that comes with murky water. I also enjoy light-weight, unencumbered “finesse” tackle in situations like this – stuff that lets you gently place an unobtrusive bait exactly where you want it without alerting the quarry that anything untoward is in progress.

Over the next couple of hours I enjoyed a few plunges of the bobber, a few violent surges and a screeching reel. I kept what I needed and released the rest. I sat on a floodplain for lunch, my back against an old birch and elk jerky between my lips. I checked the other nearby birches for medicinal chaga and moved on disappointed – only until the next pool. Leaving for the day, I paused to collect the still-vibrant turkey tails in the hollow I climbed out of and was rewarded with an over-sized birch polypore as well – all good medicine. Tea to come. 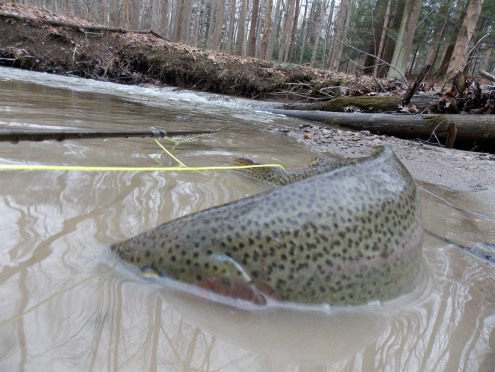 All the gear stashed at the tail end of my day, I strip to shorts and run. Yes, I need miles but I also need all of this – the rushing watercourse, the pounding waves, the surging steelhead and enriching mushrooms. I need to just try it all. In me and around me, I need the wildness.