It was good to be out today but I felt I was wasting my time. Alright, this wasn’t really true – I was exploring a new place and getting fresh air and exercise which is never really a waste of time. But I was in search of a special mushroom and it now seemed I’d found all there was in this forest, growing from a single tree near where I’d parked. And that patch had been no cause for disappointment; the tree had yielded about 5 pounds of reishi. Still, I’d been searching for more of the waxy brackets for hours now and turning up nothing. 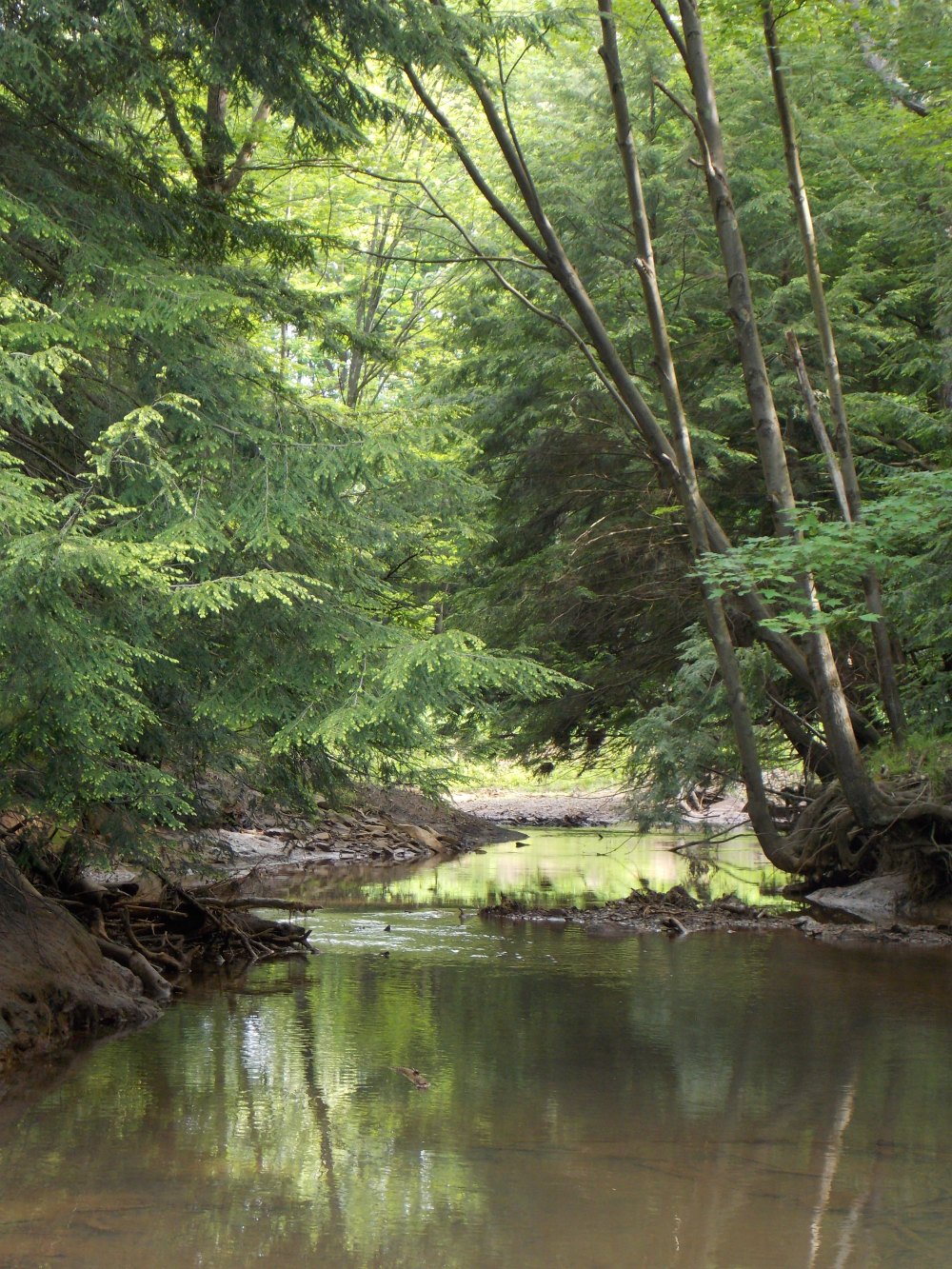 I don’t have much history with this fungus. Until today, I’d only ever found single specimens among the hemlocks at unpredictable times and places. And, honestly, I hadn’t known what to call the sanguinary alien masses until recent years. I sell my wild harvested mushrooms and so this one presented a lucrative new challenge for me. Reishi is a prized medicinal mushroom found not just everywhere and within a limited time frame.

On I went up the steep mountain stream, hemlock becoming more abundant the higher I went. Then there was a single reishi scrap on one tree, too small to harvest, and then another. Sizing up deep holes in the stream with an eye to brook trout, a fat old hemlock log came into focus, overhanging the stream. A moment later I was atop the log, photographing a series of reddish waxy brackets – reishi! Honestly, I’d been about ready to quit and head somewhere else but nature is full of surprises, it seems. 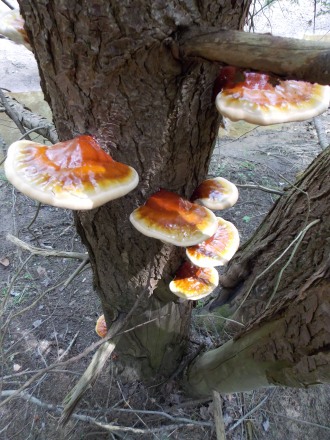 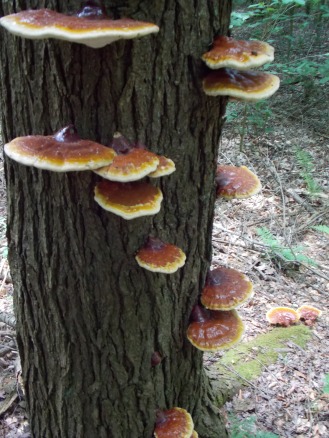 This log turned out to be just the beginning of a densely populated reishi region. Crossing the stream, I spotted more and while cutting these, spotted another large dead tree with a mother load at its base. I spent over an hour moving from log to log,  cutting carefully as reishi have to dealt with just-so to please buyers. At dusk, I had a produce tray of the mushroom waiting back in the car and I trundled downhill with a stuffed backpack and utterly stuffed net sack bearing another 10 pounds or so.

I had expected to find some reishi when I’d left home, but I’d never foreseen this. 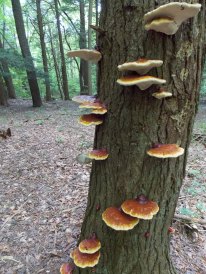 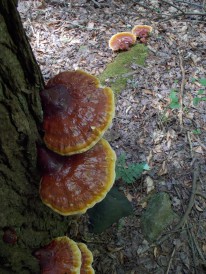 On another expedition, two weeks earlier, Susan and I had enjoyed a day of taking fat panfish from Lake Erie’s Presque Isle Bay. It was evening when I heard Susan yelling for help and looked to her 10 foot pole bent toward the water. I recognized immediately that this was not another bluegill or even a rock bass. A couple of minutes later, I lipped a 17 inch smallmouth bass, photographed and released. She’d taken it with no reel just the pole and line – bait tenkara if we’d wanted to make it seem a bit more sophisticated. It had been a slow evening of staring at the bright little float and then – Surprise!

Both of these little stories, I think, exemplify why I love the outdoors. I like to be surprised and there’s no end to nature’s surprises. Every time I’m out, I find surprises, some surprises more surprising than others. I find bright amphibians I’ve never seen before, I find lighting for photography that’s truly infinitely variable and every time the float dives, there’s another surprise waiting on the end of the line. I don’t think I ever would have found myself enraptured with wild things and wild places if those places had resembled a supermarket: a very predictable surface underfoot, generally predictable items on the shelves and a predictable climate prevailing. Excursions beyond the doorstep offered unforseeable treasures, encounters and experiences. The compulsion to go afield into the unknown was real and I hope to never outgrow the wonder I felt at the age of 8. 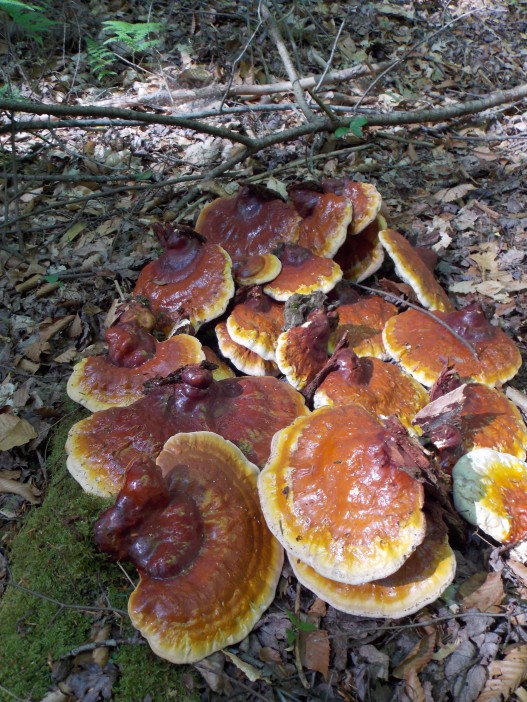 Perhaps my own conservation ethic is centered here as well. I would like to see less predictability in the world, less uniformity and conformity. And it’s troubling to get to know all too many people who have matured entirely in the predictable, civilized realm. When someone has, it shows. They want to know who they can blame when things don’t go as planned. They want to ask other people online where they can go to find some creature they imagine finding, as though animals were pinned to places. They value the aesthetics of postcard-perfect vistas over the ecology of places. When they’ve done some reading or actually spent a little time out on trails, they become adamant and defensive that they know the right answers about where to find animals, what they eat or what their native range is, as though the wild things operated with the predictability of their shih tzu or golden retriever. They want to know first what all of government’s rules are for the place they’re going, rather than simply venturing into a new realm with mind open to multifarious possibilities. They want to hire a guide to take them directly to the fish or they want to go and fish for fabricated fish that have been left for them on schedule by the beneficent state. 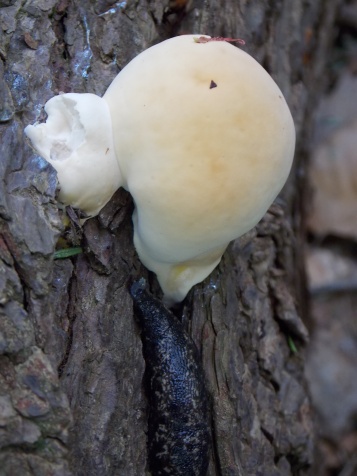 These people don’t want surprises and conclude that something’s gone wrong if they find them. But to not want surprises is to not want nature – or wildness. You can go to a mushroom farm or produce department if you don’t like surprises and you can fish for stocked trout or stop at the seafood counter. Just don’t import this mentality into the wild if you want to find what’s worthwhile there.

I want to wander away from the blazed trails that appear on maps, off to random places where risk waits and strange creatures, all the hallmarks of the uncivilized places. I want to live at the mercy of the weather and sleep on the ground in random places. I want to find all the surprises waiting between the canopy and the bottoms of the deepest rivers.

If there is, indeed, anything in this world really worth conserving, it’s wildness – the wildness of the world around us and the wildness within us both. But maybe it’s just me who feels this way.

“I found in myself, and still find, an instinct toward a higher, or, as it is named, a spiritual life, as do most men, and another toward a primitive rank and savage one, and I reverence them both. I love the wild not less than the good.”

“In wildness is the preservation of the world.”  – Thoreau