Today I’m sharing a short article of mine that ran in several newspapers this winter. 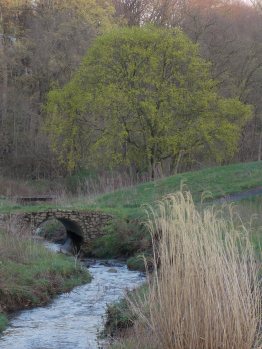 While in Minnesota, some of the gentlemen of the North Country Trail Association had described to me the difficulty of introducing their favorite long trail to residents of the towns through which it passed. Though it had been present for years, few townsfolk seemed to know what the blue blazes along telephone poles and trees were really all about. People were sometimes distrustful of the strangers who might wander through from time to time. And this is where my article came in, a small contribution the greater cause of long foot trails.

As I remember it, I was about as hot as I’d ever been the day I started walking north along a Georgia byway. On recent days back in Pittsburgh, I’d hiked five, ten or even thirty miles in preparation for this and I hoped the walk ahead really wouldn’t be so much different. I was just starting kind of a longer walk in the woods today, I told myself. And I’d do it again tomorrow and the next day and the next. Nothing around me reminded me of my city home in the north. There was red clay mud, kudzu vines blanketing unfamiliar broad-leafed trees and the dank oppressive smell of the deep south at ninety five percent humidity and eighty five degrees. The pack on my shoulders forcefully tugged me back toward the Greyhound bus stop even as I tried to stride resolutely forward. Today I’d start the Appalachian Trail, the longest trail I could think of and I’d do it alone.

But that was ten years ago and the memories fade, now so many dim panoramas passing among misty wooded mountains. I never could have imagined in advance what would pass before my eyes and under the soles of my boots in the hundreds, and then the thousands, of miles ahead. And the route would wind away from the well-trod AT in time, onto the Allegheny Trail and the Great Eastern Trail and the Long Trail and three hundred or so other dirt lines between the trees. But what is a “long trail” really and how many of us have any experience with them whatsoever?

Well, first I’ll take a step back and say that they really aren’t just dirt lines between the trees. They’re defined, in part, by the people who envision, love and maintain them and then also by those who lace up the hiking boots and make use of them. Trails are primitive conveyors of people (not to exclude other animals), paths to wild far-off places and paths back to our ancestral yearnings to wander. They’re here for people to walk all over, people who want a new perspective on the world, people who want to test themselves, burn off fat, regain their youth, live among the wild creatures and maybe even hone repressed survival skills.

“Country Gold” wandered into my first Appalachian Trail tent site late one summer morning, seemingly out of nowhere, pretty much the first human I’d run into. He was a heavily bearded feller with a deep southern accent and though weary and gaunt, exuded all the warmth southern hill folk are known for. He’d lost his job early in the year and his friend had wanted to take off and try the AT and had roped “Country” into the adventure. His friend hadn’t weathered the trials of the long trail well and had long since succumbed but here was  “Country” on day sixty five, still truckin’ south – three miles from his goal this morning. And, by the way, he wasn’t born “Country Gold”; he’d acquired a “trail name” along the way.

Still in Georgia, I stopped one long summer evening at one of the three-sided log structures that serve as trail shelters for tentless camping. My bunk-mates for the night would be Pam and Tyler, a retirement-age lady and her twelve year old grandson. Pam had been walking the AT for a lifetime and Tyler was just enjoying his fourth annual Appalachian Trail hike with grandma. Pam thought I was carrying too much in my eighty pound pack and showed me how she starts fires using “trick” birthday candles. The exchange of trail tips and tricks would remain a constant of these trail stops in the months to come.

Tom was another senior on the go. I ran into him at the luxurious trail haven of Nantahala, North Carolina and we shared trail for a couple of days. Tom, like so many others, left the city behind for the Appalachian Mountains as often as possible but there was something more than the forest and lofty views compelling him. He wanted to drink from the high-elevation springs that gushed out of the rock, imbibing the pure, clear water in its natural state; no chemicals, no filter. As president of the American Waterworks Association, he was just more attuned to this than most, I guess.

“Bean” was the picture of rugged independence. Yes, that was his full trail name. “Bean” was a well-aged hippie and a man who really could imagine nothing better than wilderness and wandering. His gnarled staff, worn pack and flowing white beard seemed to tell you that this was his third decade alone in the forest, before he’d even told you so. He was content to wander always, and he wasn’t the only such John Muir type I’d cross paths with.

Then there was “Southbounder” who wasn’t going to let his age keep him from an annual long hike on the southern AT. Dave and Steve were just out of school for the summer and wanted to see the whole of the Smoky Mountains and all its bears, if possible. Richard was also in his golden years and had long since given up a lucrative career to pursue wandering. “Stonelayer” was the quintessential youthful high speed thru-hiker, on a mission of conquest that had pit him against all 2,200 miles of Appalachian Trail. “CB” had finished his obligation to the U.S. Navy and now oscillated in life between odd construction jobs and long hauls on the trail. Christian bounded into a trail shelter clearing one evening, the picture of youthful energy and athleticism, stretching himself to add the southern A.T. to the thousands of trail miles he’d logged across the U.S. and Canada.

This is a tiny representative sample of the folks who frequent long trails and their very personal purposes. And when a town hosts a long trail, you just don’t know who’s going to wander through from one day to the next and you certainly can’t anticipate the mission they carry with them.

Another wanderer out there was named Cedric and he just wanted to look at all the trout streams along the way. He slept beside the water, cast with his fly rod and cooked on tiny wood-burning stoves. And one day he walked along one last rail trail in the far north and pitched the old tent one last time on the Canadian border, his purposes fulfilled.