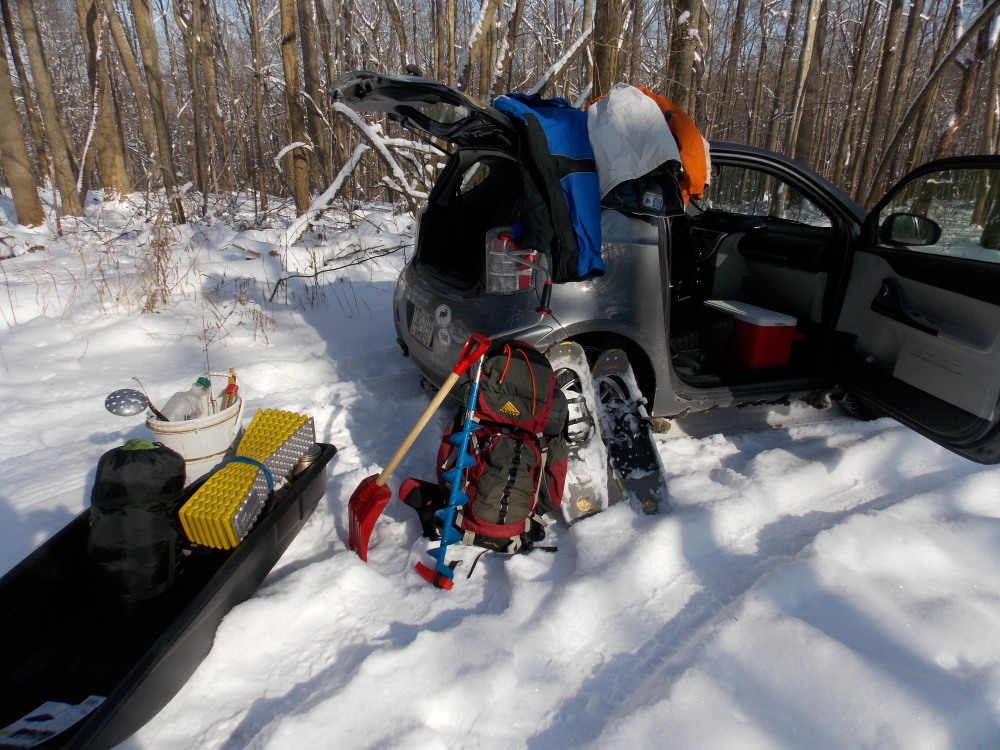 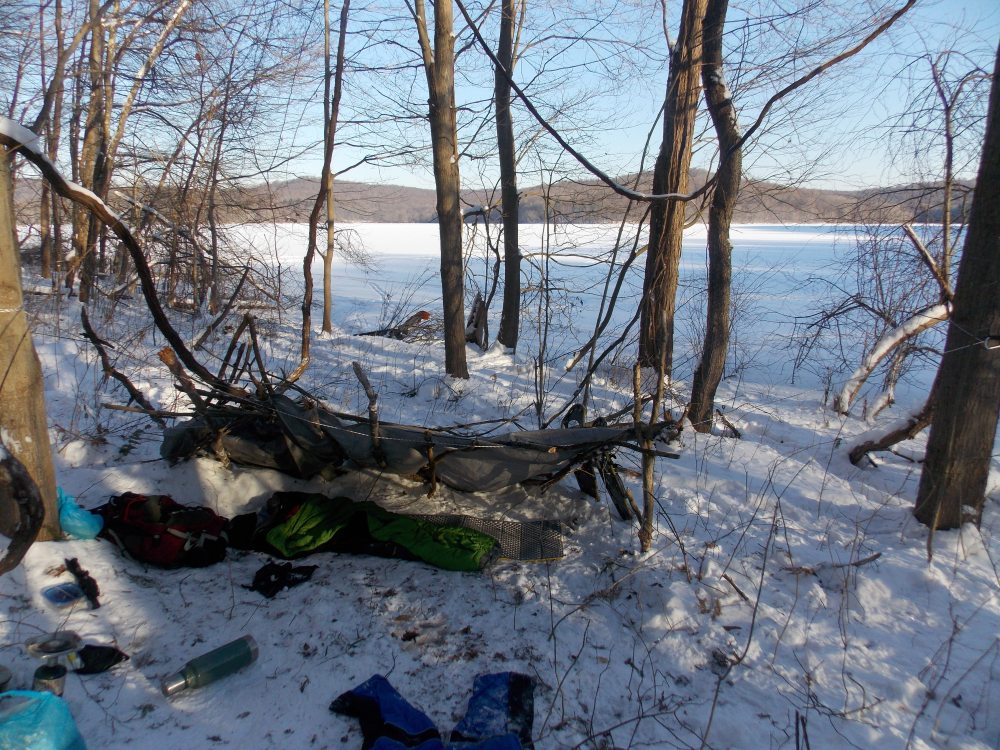 “Watch out for spiders!” Susan warned as I left to go ice fishing a few days ago. She knows the history of arachnids that sneak into camp and into sleeping bags when least expected. Yes, even in mid-winter. But it was particularly cold today, the high only reaching about 20. I wasn’t going to worry about spiders.

I found the snow-covered access road at the lake and made my way down to a familiar parking spot – a place too far off the lake to be used by casual ice-fishers but I wasn’t one of those. I was glad for the metal studs on my tires as I parked in unplowed snow. Getting out might be interesting. I then hauled out more gear than one would have thought could possibly be stowed in my sub-compact car and got ready to roll. It was a fine day to be in the woods and out on the lake. I really just wanted to maybe sit down, watch for animals and take in forest life – a far cry from the city life I’ve just had too much of lately.

I didn’t really need the snowshoes for the first leg, a third of a mile in on a gated access road but the snow looked deep in the forest. I turned toward an old tower in the woods and passed a birch tree. There aren’t a lot of those around here so I took the opportunity to stash some birch bark in a pocket in case I wanted to light a fire later. Then I tromped on downhill and lake-ward. I might have expected this downhill slide to be the easy part but it wasn’t. I’d never taken a heavy sled in through the woods without a trail before on snowshoes, to the best of my memory, and it presented certain challenges. Greenbriers and blow-downs abounded but then, what did I really expect of the Pennsylvania forest?

I was in good spirits though when I arrived at the lake, almost an hour and a half after leaving the car. The sky was still blue and only a light breeze could be felt. I’d been much warmed by the effort to get down here. I could see miles of the lake and I could see no people (you really had to work if you wanted to get here).  I was dismayed, however, to see a line of footprints in the shallow snow along the lake’s edge – someone had been here within the last week! My seclusion was compromised! But a closer look revealed that the someone had been a coyote traveling back and forth on his nightly rounds.

The patch of snow that would become my campsite wasn’t difficult to find. In a very curvaceous, forested landscape, a bare, flat patch kind of jumps out at you. This patch was immediately adjacent to the lake which would be convenient. Then the fun part started – setting up my winter camp. I hadn’t done one like this before. In the past I’ve slept out during winter in a bivy tent or a quinzee snow shelter (kind of like an igloo) but this time I wanted to sleep more in the open, just to see how that would go. I would brave the spiders of January. I began by tying a tight rope between two trees, laid in long poles for rafters and affixed a tarp. All this provided a wind break between me and the lake but no real shelter. I’d be looking up at the stars when I lay back for the night – just the way I wanted it.

I finally got to my fishing at what should have been peak time for the day – minutes before sunset. This part of the lake was new to me though and I was only guessing at where to place holes. I learned the depth contours of the area but connected with no fish. I felt cold too – not yet acclimated to this chilly wild life after weeks of indoorsmanship.

I reached into the pocket with the birch bark at some point and felt movement on my fingers. Of course, it was a small spider and he slowly began dropping on a filament line to make his escape. I walked him over to the shore and released gently onto a snow-free log where he could find a home without a wind-borne flight across the frozen lake. He’d not only adapt to a new place but had enjoyed a mile or so of easy transport in wintery weather to a nice part of the shore for web construction maybe late this March sometime.

Soon there was a sliver of moon rising over my camp and then setting with almost suddenness. All was as dark as could be out on the big lake and as quiet. All was still, including my rod tips. I trudged back across the lake to camp following barely-visible footprints.

All I’m describing here might sound straightforward – easy things that anyone could go out and try next weekend – but this would probably be a mistake. I’ve spent years doing this stuff, building to the point where I’m comfortable alone out here in a harsh and bleak environment. Things often go a little wrong with equipment or you get a little lost or it’s just not quite like you’d imagined from the comfort of your home. Ten years ago I couldn’t have imagined just going out and comfortably sleeping under the stars in January. Well, that’s not entirely true. I did imagine it but I was a long way still from being able to really put it into practice.

I shoved a small flashlight, my bait and a pack of extra batteries into my hat and shoved it into the inner of my two old sleeping bags. I laid my outer clothes over the bags and shoved some soft clothes under my headrest as a pillow. I set my fleece jacket near my head to pull over my face if I needed it. One flashlight and a big knife were next to my right hand. I then lay back, at ease, and watched Orion begin his nightly migration.

Yes, it was cold overnight but not uncomfortable. I listened to the occasional pops of trees and groans of building ice. The fox and coyote who snuck past me on the ice didn’t make a sound.

At dawn my thermometer read 15. I got the outer clothes on as quickly as possible and dashed out on the lake to jog around the little bay next to me. The best warm-up is not fire nor even shelter but warmth from within.

I cut holes before breakfast; dawn being the other peak time of day, generally. But on this morning, I did a lot of cutting, not so much catching. But then, to cut holes in the ice is to gamble. Once in a while, you’ll hit a jackpot such as a brush pile, a ledge or a spring but it’s not to be expected. Usually though, you’re hoping for anything out of the ordinary down there – almost anything can attract the panfish I pursued.

Still in the upper teens, it wasn’t exactly a warm day to be out fishing and ice was building on the auger, making it unwieldy. But I’d learned a counter to this as well a few years ago – just from experience and thinking the problem over: I cut a hole over shallow water and pushed the auger down so that the blades came to rest in the muck on bottom. Here I left it in the just-above-freezing water while I fished for a bit. When I retrieved it, it was ice-free.

Soon I saw someone else out on the ice and then another fisherman, barely recognizable specks at least a mile off. Yes, this was about as exclusive a fishing spot as you could wish for in southwestern Pennsylvania.

The dogs came out and wandered around at night. This was obvious from the four-toed canine tracks left in the snow. One had passed across my little bay while I’d slept – a red or gray fox. It would have been nice to see him.

The wind was still and so I brought my tiny propane stove out on the ice to cook breakfast. Coffee, oats and bacon were on the menu – lots of fatty bacon (another secret to winter warmth). I like my little wood-burning stove but it’s time-consuming to use as compared to gas fuel.

Springs can be found all around the perimeter of the lake during the winter if you know how to look for them. These will be the open water patches where the ice meets the land. I found a conspicuous “gusher” which provided my drinking water, kept my minnows from freezing solid through the second night and also helped pinpoint an area attractive to yellow perch which I cashed in on in the second and third days of the outing. 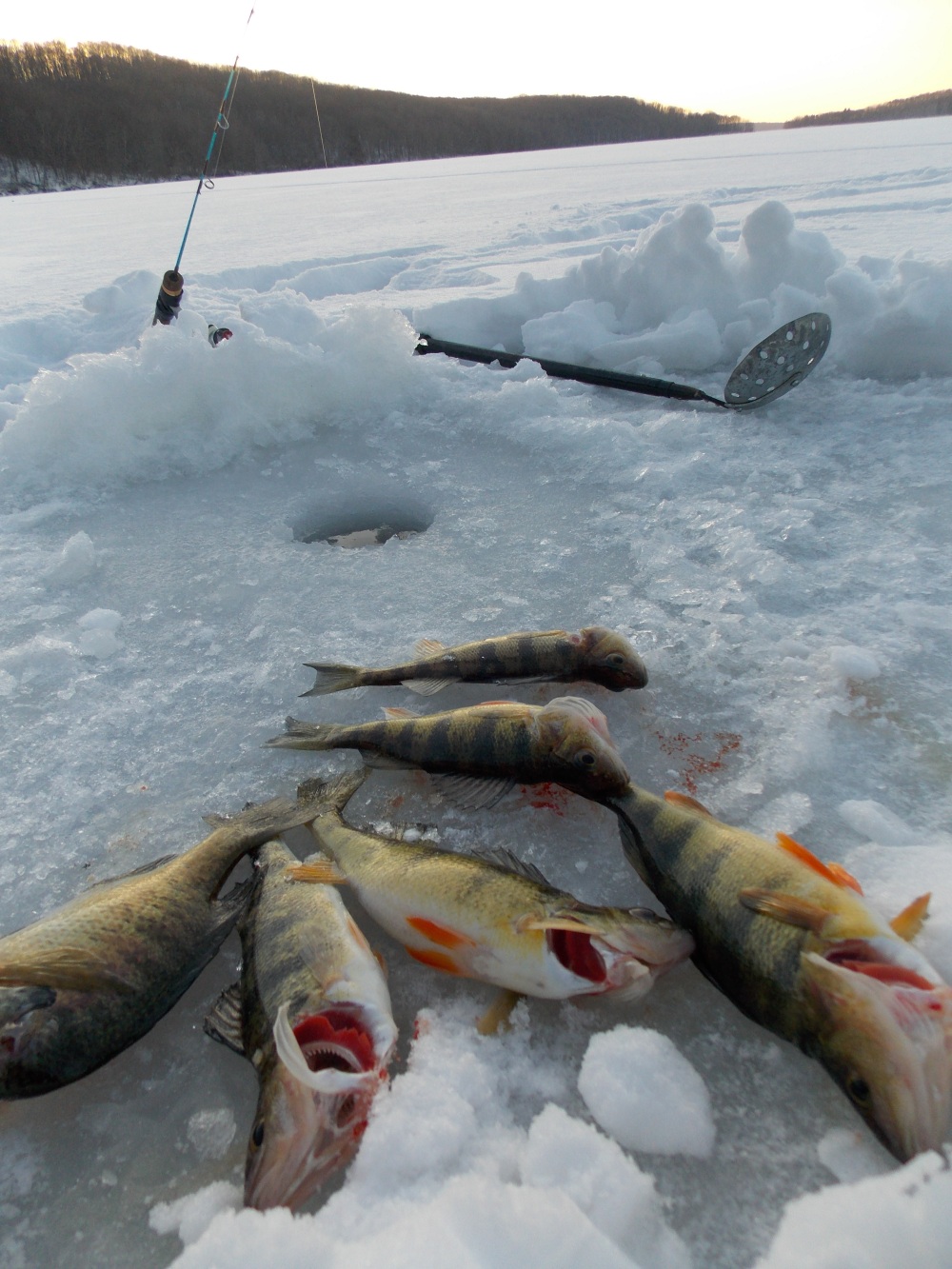 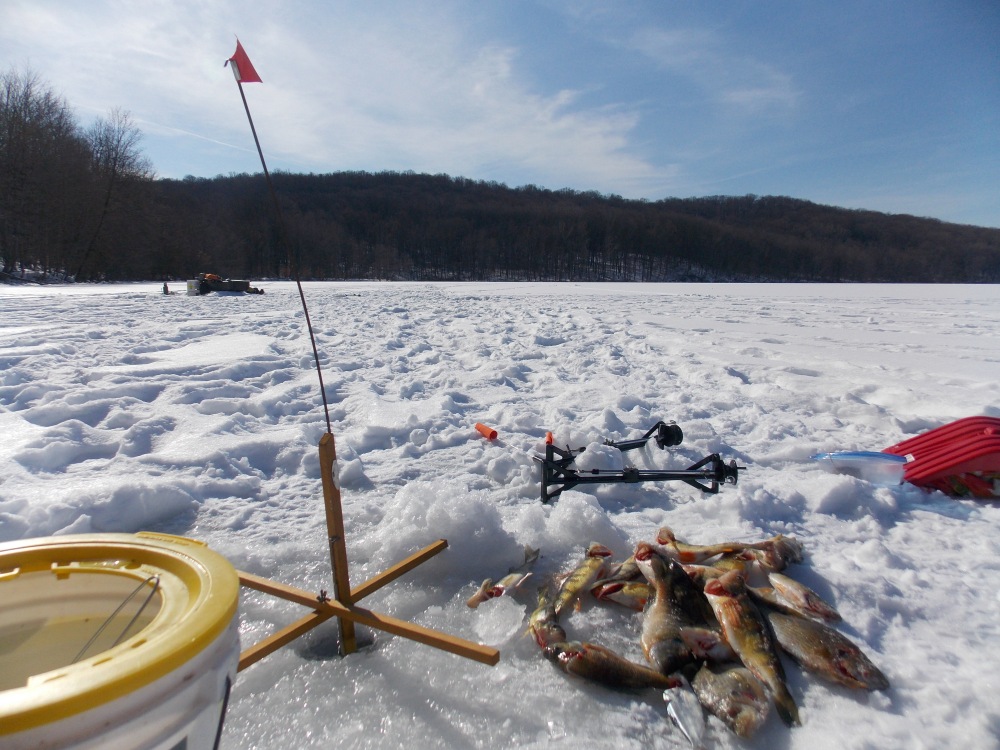 Two nights later I found myself driving back to Pittsburgh, a bag of perch in the back along with a few other incidentals. I felt very happy with the trip which had followed a warming trend leading to a spectacular final sunny evening at well over forty degrees. Dad had come up and we’d fished a favorite and much more accessible spot for hours where I’d finished by pulling up a big black crappie just after dark.

Suddenly I felt something tingly on my neck – the eight familiar little legs. No, the spiders didn’t fear the winter either though they preferred a warm body or a warm automobile interior. Half an hour later, I noticed him again, crossing in front of the lights of my instrument panel, web construction in full swing. And you never know – in my car there just might be some flies to eat.

But it got me thinking about adaptability and how animals, even the tiniest ones see their world. And I think they see only opportunity. They can see only opportunity. This spider could have despaired that he had experienced the misfortune of winding up in the hair of a human, of being yanked away from his home and then being forced into a world utterly indescribable to him – sort of chamber in motion with hot air blowing in and strange lights. But what kind of paralyzing fear and confusion did this environmental shift inflict on our friendly arachnid?

None – he was building a web and hoping for breakfast – surviving for as long as he could, hopefully long enough to make more little spiders.

And herein is the lesson passed on by the fragile winter spider to us humans of advanced cognition and ability: Why fear or be paralyzed by things that are not only beyond our control but beyond our comprehension? How much better off would we be if we could remain willing to adapt, adapt again and again endlessly, shedding the need for control? How much happier might we be? How much more in sync with nature?