Too often we think of adventure as waiting for us somewhere across the continent and miss out on the opportunity for adventure that waits all around us every day. 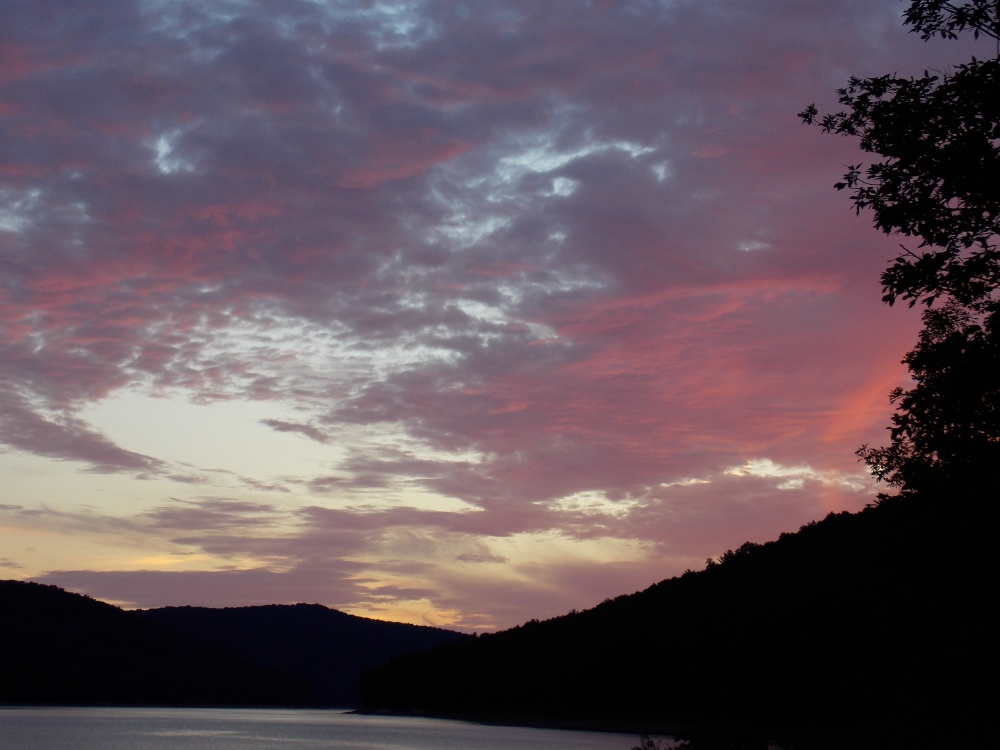 Yesterday evening a get-together with my dad didn’t work out so I rapidly concocted a back-up plan. Water conditions, I thought, would be ideal somewhere tonight for walleye and I would like to be wherever those conditions occurred.

In case I haven’t explained this before, here’s a brief overview of the best fishing situation that occurs regularly in the Allegheny and Monongahela river watersheds:  The streams flood and then the rivers flood, the more the better. The streams start falling first after rain ends. Almost as soon as they begin to fall is the right time to fish – then until they are low and clear again. The river will still be very high and muddy, not at all optimal for sight-feeding fish and many of the big river fish are crowding into tributaries we’d normally think of as too small.

I had 3 streams in mind as I departed (I never name which ones), all tributaries of the Allegheny. I would check until I found one at a level I liked. Stopping at the bridge over “Hicks Creek”, an almost unknown place to Pittsburgh’s fishermen, I pulled out my fishing pack, loaded in supplies including my phone and wallet, set the pack down and walked out on the bridge to take a look. This was the middle-size stream of the set I’d selected and I was truly surprised to see how very high it still was. I wanted just a little less flow and a little more clarity than this so I went on to the smallest creek, the place that would drop and clear first.

After a 12 minute drive, I pulled into my usual spot at Trickle Down Creek and found the water to be just right – just a little better than opaque and filling almost the whole stream bed. Trickle Down is a watercourse I don’t think anyone else would pick for walleye. I’d never caught a walleye from it but I had suspicions. Returning to my car, I reached for my pack but it wasn’t there!

A fast drive back to Hicks Creek followed, a retrieval of my pack from beside the road (and phone and wallet), and a quick run back to Trickle Down. The sun had just set, signalling the beginning of the walleye bite. I decided to walk down to the mouth where I found a very muddy and roily Allegheny inundating the zone where I’d planned to stand for leisurely casting. There was a new low fence too and knot weed growing in a small jungle both in and out of the water. 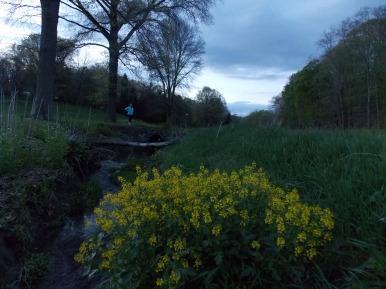 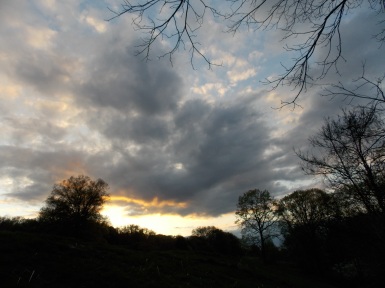 I decided that this was where I wanted to be and I was going to fish anyway. I found a heavy stack of bricks and scooted this over against the fence. I then lifted the largest stone I could possibly heave over the fence and dropped it just on the other side, all this to facilitate straddling this inconsiderate obstacle. I hacked at the knot weed forest. The light was waning and the fish were biting – I needed to get a line in! I stepped from one rock to the other, doing my best in spite of the instability of my landing pad. As I eased my weight onto it, stone #2 slipped, my foot plunged into a deep beaver hole that had been hidden in the vegetable mass, and an 80 pound boulder rolled in on top of my shin. In a split second, visions flashed through my mind of twisting to break the bone, then cutting away the ensnared leg so that I could crawl to freedom. It would be a valiant effort, executed within sight of the nearby housing development. As it turned out, I was able to heave and wrench, freeing myself relatively easily, with mild laceration rather than a leg severed below the knee.

I was a little rattled as I began casting. It just looked too muddy but I knew better. The walleye could find my white twister tail even in this. I cast until complete darkness and only one fish connected with my lure, a large sluggish thing that freed itself just before I was able to get a look.

I was disappointed but I wasn’t finished just yet. I walked back up a third of a mile or so to the first two bridges and started wading upstream. There’s a deep pool up here that invariably holds fish and I wanted to at least try this one. I noted how very dark it was down here in spite of nearby security and street lights illuminating things above the level of the stream. This was an urban place but a wild watery chasm cut through it. Suddenly, the night air was rent by inhuman shrieks, from just above. My headlamp beam swung sky-ward, revealing half a dozen sets of glowing eyes and thrashing branches. A troupe of howler monkeys! Maybe just raccoons. I stood and watched the dendrophilic herd run back and forth across their sycamore bridge, high overhead.

My favorite pool offered nothing more than a couple of nips that were maybe fish, maybe not. The water was deep, opaque and fast. The pool was full of re-bar and jagged concrete edges, all of which made for uncomfortable wading for a lone nocturnal adventurer. Well, that was it – no fish, despite my certainty that they’d be here for me. And, after all, my confidence in this spot only derived from a night 4 or 5 years earlier when I’d been wading along here with dad just after dark and I’d spotted a couple sets of little glowing orbs, reflecting in my headlight. I’d always thought that these were walleye or sauger eyes but who knows? 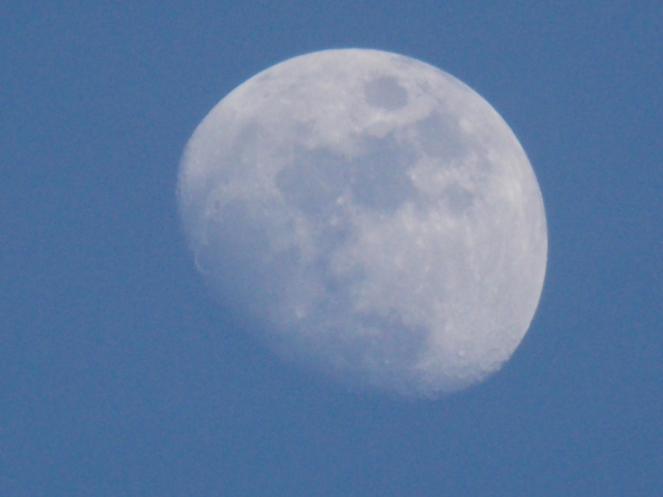 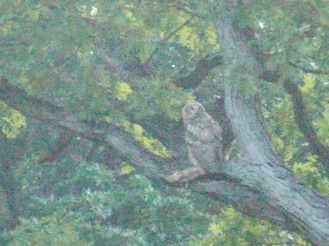 I was back at the trail up to the car but there was just one more slight possibility: there would be a point somewhere below me where the current dissipated into the still flood waters of the river, which pushed extensively upstream into the creek channel. That interface can be key for river fish moving up at night. So, I started down, making some casts into the current along the way. The water started getting deeper as my headlamp lit up the pale reflection of a sycamore that had been dislodged and tipped out across the stream by the recent floods. I started easing through the depths to get around this when I caught a glimpse of something approximately round rushing upstream toward me. I cut the light back on and immediately wished I hadn’t. It was softball-size doll head smiling at me, apparently being pushed upstream by a strong eddy current. I immediately regretted every horror movie I’d ever seen commercials for. It sent shivers. Taking a step back from this, I almost bumped into the beaver who was trying to make his way around me. This spot seemed like the end of the line. It was late, time was up about an hour earlier – nothing was happening here. And when a floating doll head materializes from the depths and rushes toward you, that’s a pretty unambiguous “go home now” signal.

I found a way around the sycamore and found that my first steps were a bit deeper. I could also tell that the current subsided here into more of a pool. My first retrieve of the Sassy Shad was intercepted by something vicious. I had him in hand a moment later, a fine young walleye a bit small for the creel. This was good. A couple more casts produced a second. I’d switched to my ultra light outfit earlier and this made it all the better to land a 17 inch keeper who was dispatched and tossed up on the gravel. The next cast was snatched just as the lure neared my rod tip – missed! A few minutes later, this walleye also joined the other.

And that experience defines satisfaction as an angler: to know the patterns fish move in, to know them well enough to show up at a seldom-fished location that most others would write off, to work it doggedly and finally go home with the fish you came for.

At midnight, I closed the rear hatch on my car, two fine fresh walleye on their way home to the dinner table. Adventure accomplished! 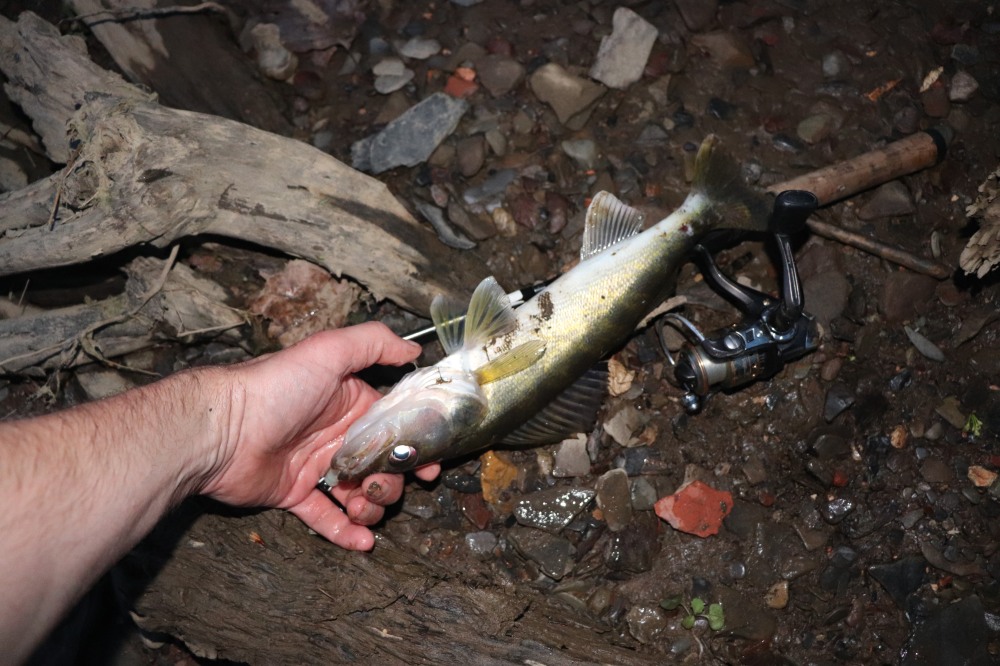