This year I’m going to feature a variety of Pennsylvania fishes on my site, fishes that I have at least a little experience with, fishes that I know really swim here. I think there’s a lot more fish diversity out there than we sometimes give our state credit for as we reel in bluegills, bass and stocked trout.

If you’ve seen schools of large fish that just won’t bite holding near the surface next to a dam wall on the Ohio River, you’ve probably encountered gizzard shad. If you’ve visited the Lake Erie shore just after ice-out only to find a stinking mass of rotting fish carcasses, you’ve probably encountered the gizzard shad. If you’ve ice-fished a place like Lake Arthur and noticed the sparkles of hundreds of tiny ice-bound fish, expressions on their faces resembling Han Solo’s memorable adventures with carbonite, you may be dealing with gizzard shad.

Gizzard shad don’t bite because they’re looking for plankton, not your Sassy shad, Whopper Plopper or Mepps. Not even close – these clupeids aren’t even looking for zooplankton, they’re after the far more abundant phytoplankton, mostly micro algae if you want to be super specific. That’s not to say that a little bit of everything doesn’t get sucked up though as these filter feeders strain the water. Upon ingestion, foods are first strained through a multitude of fine gill rakers on the gill arches themselves and then sent to an actual gizzard organ where they’re ground with sand to start the digestion process.

That’s how it works, in case you’ve ever wondered as you’ve watched schools of hundreds of these pass, ambivalent about whatever you’re casting (unless you’re casting a cast net). Other Pennsylvania herrings do strike lures and are fine sport but a strike is almost unheard of with gizzards. The skipjack herring fights like a small salmon in the Ohio River and the American shad offers fine sport seasonally during its coastal runs.

Within Pennsylvania, gizzard shad are native to the Ohio River, its major tributaries and to Lake Erie. They’re also native to much of the state’s Atlantic slope waters but not to central Pennsylvania. Maybe that’s just because the type of turbid, slow waters they prefer just don’t abound here. 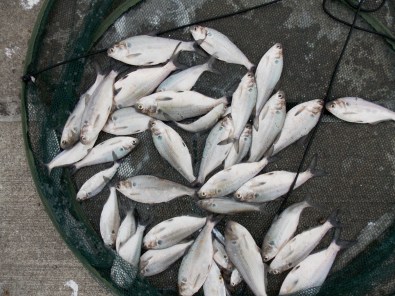 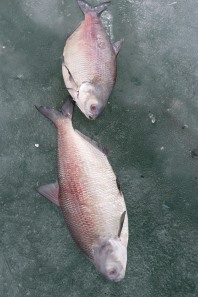 So, what good are they to us fishermen? Well, it would be easy to say just about no good at all. This isn’t really true though because we like to catch such things as bullhead, big rainbow trout and northern pike and the gizzard shad keep all of these fed. Immature gizzard shad even feed our bluegill and crappie and the largest shad are still not too large for muskellunge (though gizzards can reach 20 inches or so, putting full-grown fish out of reach of most predators).

Then too, it’s always useful to know what’s happening in the waters you’re visiting, to understand something about the flow of nutrients and the complex food web. This knowledge offers its own satisfaction and one way or another, makes us better fishermen.

I like to think of myself as a brook trout expert. One of the people who knows more about Pennsylvania brook trout than I do (I’m pretty sure) is Michael Richardson who I’ve been online friends with for a while. A few weeks ago he published a really fine article on PA brookies and how to find them in the Alleghenies where they hide. Take a little time for his thorough write-up on the subject here, you’ll learn a lot:

The second video of the fourth hike of the Eastern Brook Trout Solo Adventure: